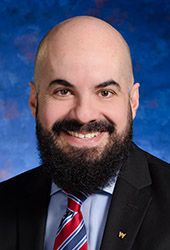 Orlando is actively involved with numerous community serving organizations. He served as Treasurer for the Child Crisis Center of El Paso, former board member for the Ronald McDonald House, and committee member for the Alzheimer's Association. He has also donated his time and professional work knowledge for the betterment of community organizations, such as chairing the United Way's IT Steering Committee, and setting up computer work labs for community organizations that serve underprivileged minors. On multiple occasions, he has served as a guest speaker at the University of Texas at El Paso’s Masters of Business Administration program, where he has lectured on Financial Technology (Fintech) topics with MBA students.

Orlando is a graduate from Southern Methodist University in Dallas, Texas, receiving his Bachelor of Science in Computer Engineering. Orlando has also gone on to receive his Masters of Business Administration at the University of Texas at El Paso. He returned to his undergraduate alma mater to attend the Southwestern Graduate School of Banking (SWGSB) at Southern Methodist University, where he received both the SWGSB Alumni Scholarship and Graduation with Distinction Honor.