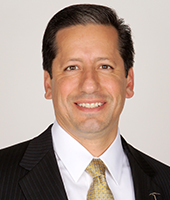 Vice Chairman of WestStar | Director since 2014

Edward Escudero is President and CEO of High Desert Capital, LLC, an El Paso-based small- business financing company. He is also Vice Chairman of WestStar Bank, a $2 billion regional bank.  Until 2013, Mr. Escudero was the Executive Vice-President and CFO of C&R Distributing, a major distributor of fuel and lubricants and owner of various convenience stores in West Texas and Southern New Mexico. He also served as the Secretary and CFO of Petro Stopping Centers, LP. During his tenure at Petro, Mr. Escudero helped to double the company’s annual revenue to more than $2 billion and expand to have locations in over 34 states. While at Petro, he held the vital role of managing key departments within the company, including Accounting, Legal, Human Resources, Audit, Financial Planning, and Information Systems. In 2007, Mr. Escudero was instrumental in coordinating the sale of Petro to TravelCenters of America.

Mr. Escudero has long been a supporter of the El Paso region via his participation on both corporate and nonprofit boards. He currently serves on the board of El Paso Electric Company, Hunt Companies, Inc., Medical Center of the Americas Foundation, Hospitals of Providence Memorial/Sierra Campus, Paso del Norte Health Foundation, Texas2036, El Paso Collaborative for Academic Excellence, Council on Regional Economic Expansion and Educational Development (CREEED), UTEP Business Advisory Council, UTEP Development Board, Texas Business Leadership Council (TBLC), Texas2036 and the Trellis Company. He also served on the Texas State Securities Board from 2007 to 2011 and the El Paso Water Utility Public Service Board from 2010 to 2013.

Mr. Escudero has received several awards that recognize his achievements and philanthropic efforts, including the Lucy G. Acosta Humanitarian Award in 2020, El Paso Community Spirit Award in 2015, the El Paso Business Hall of Fame in 2014, the Hispanos Triunfadores Award in 2013, and the UTEP Golden Nugget Award in 2012.

Mr. Escudero is a CPA and received his B.B.A. in Accounting from the University of Texas at El Paso.